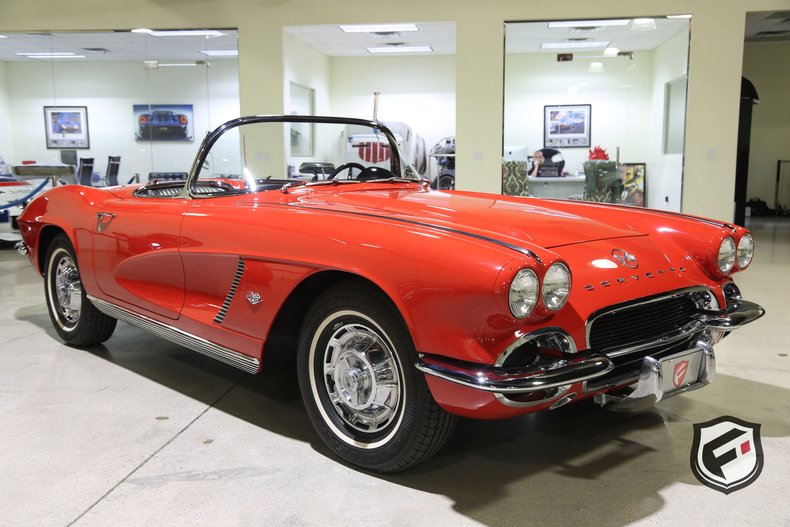 1962 CHEVROLET CORVETTE BEAUTIFUL INSIDE AND OUT! NEW TOP, CLEAN BODY!

This is a gorgeous 1962 Chevrolet Corvette in excellent condition! The car features a period correct 327, 300HP motor, and a 4 speed manual transmission. This car was restored in 2007 and there are many receipts and documents available as well as a full binder worth of receipts, pictures, and documentation on the car with over $35,000 in receipts.

The Chevrolet Corvette (C1) is the first generation of the Corvette sports car produced by Chevrolet. It was introduced late in the 1953 model year, and produced through 1962.

Four taillights appeared on the 1961, a treatment that continues to this day. Power ratings for the dual-four barrel engines did not change (245 hp and 270 hp) but this was the last year of their availability. This was the last year for contrasting paint colors in cove areas, and the last two-tone Corvette of any type until 1978. Also debuting in 1961 was a new boat-tail design later used on the C2.

The 1962 model year was the most popular and the last Corvette with a solid-rear-axle suspension that was used from the beginning. With two new engines it was also the quickest. Engine displacement increased with the introduction of the 327 cu in (5,360 cc) engine, but dual 4-barrel carburetor engines were no longer available. Hydraulic valve lifters were used in the base 250 hp and optional 300 hp engines, solid lifters in the optional carbureted 340 hp and fuel-injected 360 hp versions. Rocker panel trim was seen for the first time, exposed headlights for the last, until 2005. This was the last Corvette model to offer an optional power convertible top mechanism.